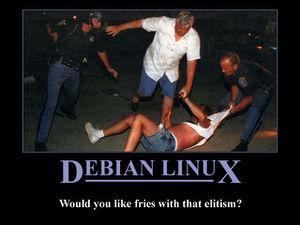 It's the bees' knees. It's the wasps' nipples (though as of 2019, I have actually started using Arch on some of my workstations).

I'd like to become a Debian Developer. ITP ideas:

Up until the addition of a deb-pkg (and bindeb-pkg) target to the kernel Makefile in 2004, the make-kpkg tool from kernel-package was the recommended way to build a Debian kernel package. This is now deprecated, and make deb-pkg (using an unmodified kernel tree) ought be used going forward.

To specify the package version on the command line, use e.g. KDEB_PKGVERSION=$(make kernelversion)-2.