CUDA (and General-Purpose Graphics Processing Unit programming in general) is rapidly becoming a mainstay of high-performance computing. As CUDA and OpenCL move off of the workstation, and into the server -- off of the console, and into the cluster -- the security of these systems will become critical parts of the associated trusted computing base. Even ignoring the issue of multiuser security, the properties of isolation and (to a lesser extent) confidentiality are important for debugging, profiling and reproducibility. I've authored the CUBAR set of tools to investigate the security properties -- primarily the means and parameters of memory protection, and the division of protection between soft- and hardware -- of CUDA on NVIDIA hardware since the G80 architecture. This was essential information in the attempt to implement an open source CUDA software stack (see libcudest). 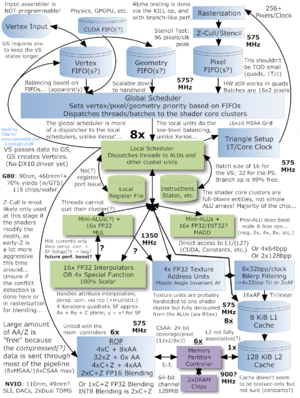 Probe memory via attempts to read, write and execute various addresses, including:

Determine whether CUDA contexts can be moved or shared between processes:

Determine how many contexts can be created across a process, and across the system.

Clone the git repository. Define (either via shell export or within a new file Makefile.local):

Only those tools which launch CUDA kernels use the Runtime API. They might be converted to the Driver API.

It is necessary that cudadump spawn cudaranger rather than launching the kernels itself; a kernel failure results in all libcuda calls returning an early error (CUDA_ERROR_DEINITIALIZED (4) or CUDA_ERROR_LAUNCH_FAILURE (700)) for the remainder of a process's life (ie, creating a new context usually also fails FIXME: provide proof).

The CUDA Shell (currently making use of the runtime api for kernel launches) facilitates stateful, invasive examination of the CUDA memory/process system. It has online help via the "help" command.