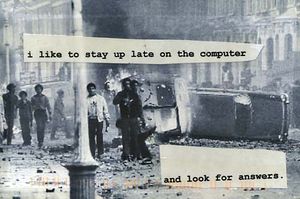 I like to stay up late on the computer, looking for answers.

This is the wiki of Nick Black (aka dank), located at 33°46′44.4"N, 84°23'2.4"W (33.779, 85.384) in the heart of Midtown Atlanta, GA. Dankwiki's rollin' wit' you, though I make no guarantees of its correctness, relevance, nor timeliness. Track changes using the Recent changes page. I've recently revived my strictly technical DANKBLOG, this wiki and grad school having not satisfied ye olde furor scribendi.

I primarily write to force my own understanding, and remember things (a few entries are actually semi-authoritative). I'm just a disreputable Mariner on your way to the Wedding. If you derive use from this wiki, consider yourself lucky, and please get confirmation before relying on my writeups to perform surgery, design planes, determine whether a graph G is an Aanderaa–Rosenberg scorpion, or feed your pet rhinoceros.

Do not proceed if allergic to Linux, postmodern literature, nuclear physics, or cartoonish supervillainy. ■

did autistic people design this software? BECAUSE I'M STARTING TO LOVE IT.

"I have never known a greater monster nor miracle than myself." - Michel de Montaigne