A 22nm update to Sandy Bridge, scheduled for release in late 2012. This will be the first chip to feature Intel's new "FinFET" trigate nonplanar transistor technology. Its Panther Point chipset is expected to support PCIe 3.0, while the IGD will add DirectX 11 and OpenCL 1.1 support. Ivy Bridge is expected to continue making use of the LGA1155 socket interface introduced with Sandy Bridge. 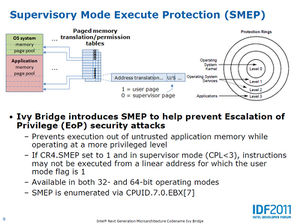 Microarchitecture is expected to be similar to that of Sandy Bridge.

Ivy Bridge will introduce the "Panther Point" 7-series PCH (Platform Controller Hub), and the second-tier "Patsburg" X79 (this latter will use DMI rather than QPI). Native USB 3.0 and PCIe 3.0 support is expected on-chip.