I recorded a DANKTECH video, "Console sex with Notcurses" as a gentle intro (its demo has been superseded by the 1.1.0 demo). You can run this same demo on your local machine with notcurses-demo. 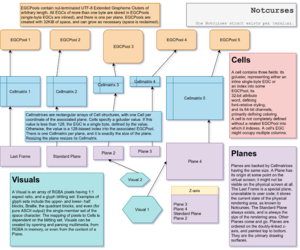 The Linux "system console" is a virtual device mapping to some device. We're primarily interested in the VGA text console, and the framebuffer console. The console supports only 256 different glyphs (512 with diminished color support), and never more than 256 colors.