An angel just got its wings!

The curve of binding energy

Subcritical HEU billet (Y-12). Delicious, but deadly! Do not stack.

Your modern criticality fetishist has a rough time of things. Since 2001-09-11, great stocks of (unclassified) information have been purged from government sites. Various other fans (see the See Also section) maintain partial archives. Relevant conference proceedings (compressed matter physics, etc) get snapped up on used book sites quickly. My recommendation is a thorough grounding in nuclear engineering and the relevant mathematical methods (which you'll come across in the NucE books), at which point you'll be well-equipped to daydream about your own neutron initiator ideas and radical implosion symmetries. The boys at LANL and similar places haven't been able to do criticality experiments since the CTBT's passage, so everyone's on a level (simulation-only) playing field. Today's supercomputer is tomorrow's slide rule; an HP48GX will certainly get you through spherically symmetric detonations, and a few video cards are a fine platform for running your own hydrocodes.

The following textbooks range from introductory to advanced material, and all require some basic physics and associated mathematical sophistication. For obvious reasons, textbooks on actual weapon design, testing, engineering and maintenance are difficult to come across. There's a wide variety of excellent books on political theory of nuclear weapons, which I'm unqualified to rate (update: Kahn's On Thermonuclear War is absolutely required reading); see blogs like Arms Control Wonk and Total WonKerr for more information, or your local university's political science department.

There's pretty much an endless line of popular-audience books about nuclear weapons, especially their early design and the characters behind them (I've got about a dozen biographies of J. Robert Oppenheimer alone). These require no particular scientific or mathematic background. Of them, the best include:

The Greatest Photoshop of All Time? 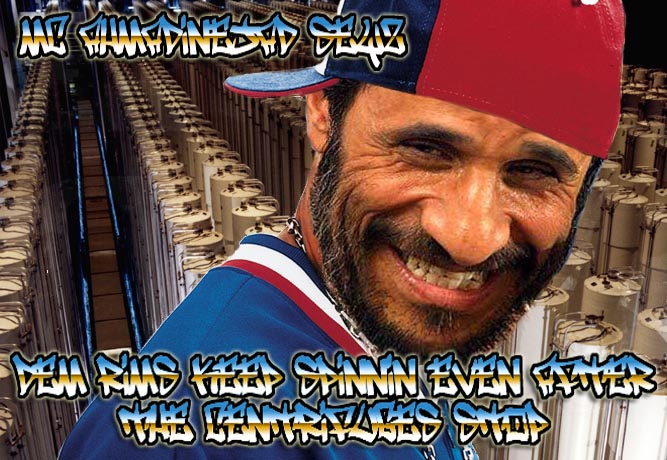 The greatest Photoshop of all time? Yes.
Retrieved from "https://nick-black.com/dankwiki/index.php?title=Nuclear_weapons&oldid=2020"