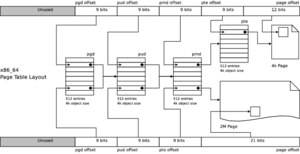 Making pages larger means fewer TLB misses for a given TLB size (due to more memory being supportable in the same number of pages, due to narrower page identifiers), large mapping/releasing operations will be faster (due to fewer page table entries needing to be handled), and less memory is devoted to page table entries for a given amount of memory being indexed. The downside is possible wastage of main memory (due to pages not being used as completely). A 2002 paper from Navarro et al at Rice proposed transparent operating system support: "Transparent Operating System Support for Superpages". Applications must generally be modified or wrapped to take advantage of large pages, for instance on Linux (through at least 2.6.30) and Solaris (through at least Solaris 9); FreeBSD (as of 7.2) claims transparent support with high performance.

Page clustering (implemented by William Lee Irwin for Linux in 2003, and not to be confused with page-granularity swap-out clustering). There's good coverage in this KernelTrap article. This is essentially huge pages without hardware support, and therefore with some overhead and no improvements in TLB-relative performance. It was written up in Irwin's 2003 OLS paper, "A 2.5 Page Clustering Implementation".