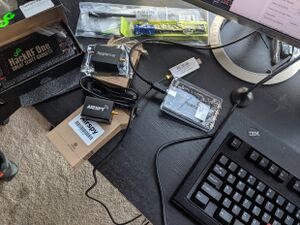 SDRs are available both as standalone units and attachments for a PC, where PC functionality will generally be required for processing and display. I will generally be discussing only the latter. For a nice example of a self-contained solution, see the LimeSDR Micro rather than connecting via USB, it comes with a mated Raspberry Pi 3.