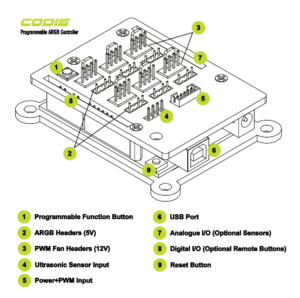 An ARGB/PWM controller from Gelid, based around an Arduino Uno clone plus a shield with 12V PWM and 5V ARGB outputs (six of each). Each 5V channel is documented as capable of putting out 4A (though the SATA power connector can only carry 4.5A total of 5V power in...). All the shield's outputs are powered by the mandatory SATA power; power supplied to the board cannot drive these outputs.

The ARGB can be controlled using e.g. the FastLED Arduino library. I am not aware of any means of controlling the fans from code, and doubt that one exists. There are no ARGB effects until code is written to generate them.

They have several advantages over software control based on the CPU--no computing resources are consumed, they'll never be preempted by other processes, they can be deployed anywhere that power can reach, and they start immediately on boot. No USB connection is necessary once they've been programmed. You can furthermore employ the unused pins as you would on an Arduino. The shield can be moved to e.g. an Arduino MEGA 2560, or even just an official Arduino Uno.

The shield has six rows of interfaces:

(bottom is opposite the USB/power jack)

I've purchased about 10 of these devices (TitanRig has them on clearance for $14.99 as of November 2022). At least three had hardware problems such that code couldn't be loaded to the devices. The Arduino clone the CODI6 is based on does not seem to be the best.