I've been watercooling my primary personal machine since 2020. It started off simple—a waterblock on my Threadripper 3970X, an EKWB reservoir+pump combo, and a Hardware Labs GTR360 radiator. A total of about $480 (not including fans), less than my motherboard cost. It is no longer so simple: the same machine in its current incarnation boasts a monoblock, a GPU block, a custom GPU backplane, four radiators, two reservoirs, four D5 pumps, two temperature sensors, two discrete inline sensors, and about twenty attachments of all kinds (note that this is an almost laughably overpowered setup). There's at least $1000 worth of watercooling crap in there, and another $500 of fans. I guess you could say things are getting serious.

I've put together some thoughts having watercooled for over two years.

It might be useful to read section six from this essay of mine, but you can probably get by without it. It is very useful to have a working knowledge of the Laws of Thermodynamics and Fourier's Law (Pascal's Law and some basic hydrostatics wouldn't be bad, either).

TIM is thermally conductive viscous material applied between heat contacts. There's some between your dies and the IHS, and then some between the IHS and your waterblock/heatsink. Its purpose is to smooth out the conducting surface, which is dotted with microscopic pits that would otherwise preclude contact. TIM is one or two orders of magnitude less thermally conductive than metals making direct contact, but much more conductive than the air which would otherwise fill these regions. Thermal conductance is measured in W/Km (watts per kelvin-meter).

It's not unwise to keep track of your ambient, coolant, and component temperatures over time. If you see the latter rising while the former is constant, your thermal material might be breaking down, or you might have dust in the machine, or you might have a contaminated waterblock.

Modern tower CPU coolers are pretty damn good, and can handle most processors without getting very loud or allowing the chip to get too hot. A top-of-the-line bequiet! or Noctua tower cooler can be had for $100, and will serve most people just fine. Get one, slap on some case fans, and you're done. GPU air coolers are not generally as capable (just look at the power draw of modern GPUs vs CPUs); if you intend to make heavy use of a powerful GPU, you'll be making a lot of noise. Air coolers are not generally well-suited for overclocking, but it depends entirely on how much power the die is drawing.

Your computer can almost certainly be effectively cooled with a tower cooler and some case fans.

Watercooling, then, has four advantages over air cooling:

I skipped over AIOs (all-in-ones, aka "closed loops") entirely, opting for a custom loop out of the gate. An AIO will consist of a waterblock with integrated pump, a radiator, tubing to connect the two, and fans on said radiator. AIOs are significantly cheaper, easier to install, simpler to work with, and don't end up requiring a bunch of small expensive attachments. You buy it, install it, and you're done. They have limited lifetimes due to coolant loss, though I wouldn't be at all surprised if someone brought out a refillable AIO. They're comparable to the best air coolers with regards to cooling capability, though they'll likely run quieter.

Every pump I'm aware of runs off 12V, with a maximum draw no greater than 30W. You can thus power them with any combination of Molex, SATA, or even PCIe cables, so long as you match the final form factor. I use PCIe cables with Molex converters; PerformancePCs sell a nice sleeved one. Almost all pumps are either D5 or DDC; the former is quieter and more powerful, but slightly larger. I roll exclusively with Laing D5s. PWM models can be controlled on the fly, while "Vario" models have a physical potentiometer which almost always ends up being a bitch and a half to get to. I recommend going with PWM. Varios will typically have a 3-pin hookup reporting tach, while PWM will have a 4-pin hookup.

As for soft vs hard tubing, I use soft tubing, and don't intend to ever do otherwise. Soft tubing is trivial to cut, cheap, has plenty of give, bends without a heating gun, doesn't shatter, and is already quite enough of a pain in the ass. Old types of soft tubing were prone to plasticizer leeching, but newer types don't have them. I recommend EKWB ZMT (zero-maintenance tubing), so long as you don't mind it being opaque. Cheap anti-kinking coil can wrap your soft tubing to give it more resistance, and also provide some color. (Some) hard tubing can survive higher temperatures than soft tubing, but such high temperatures are bad for your other components, especially pumps, and ought be avoided.

Reservoirs are primarily useful to keep pumps wet. Adding water volume doesn't solve any real problems in one's loop. Pumps will quickly deteriorate if run dry. It's doubtful that you'll have more than a liter of coolant throughout your loop. I've provided some component volumes in this table.

Draining your loop will be a pain in the ass no matter what. The process is simplified with drains, which ought be put as low in your loop as possible (gravitational low). With that said, no drain is going to completely clear your loop by itself; there will be some shaking and leaning involved. The use of quick-disconnect valves can help; when engaged, they partition the loop. Draining is typically accomplished with either ball valves (they have a lever which controls flow) or drain valves (they are airtight unless depressed, at which point they allow flow). Drain valves typically come with two tops: a short closed one which is typically used, and a longer, open one which is used for draining (it presses the flow control, and allows a compression fitting to be screwed in). If you don't have a free port in which you might add a drain, a T-valve can be useful.

Hard and soft tubing use different connectors. Soft tubing is best combined with G¼ compression fittings. Hard tubing seems to use barb fittings, but I don't really know much about it. Compression fittings are virtually leak-proof when used correctly. First, ensure that there's no dust on the o-ring(s). Screw the base securely into the port, being careful not to overtighten (overtightening reduces the effectiveness of o-rings. Do you want to blow up Challenger?). Insert the tube into the ring (run the tube under warm water if you encounter difficulties), until a bit of tube comes out the other side. Connect the tube to the base, pushing it as far down as it can go. Rotate the ring until it is tight and touching the base. Ideally, you should see neither threading nor tubing between the base and the ring. Go ahead and yank on the tube. It's not going anywhere.

Once everything's connected, fill your system. This will usually be done through a fill port on a reservoir. You will almost certainly need to fill the reservoir, run the pump for a second or two (only until the reservoir is emptied; do not run the pump dry!), and repeat this process several times. Eventually, running the pump will not lower the reservoir level; at this point, the system is full. Water above 4℃ expands as it heats, so you might want to leave a few milliliters empty, especially if you're using inflexible hard tubing. There might be some small air bubbles in your loop; they'll go away with time.

Theoretically, the loop ought be drained every six months or so, but I've never bothered, and suffered not at all for it. Like I said earlier, keep a record of your temps vs ambient, and if you have a problem, deal with it.

Congratulations! You're now a watercooling pimp, aka a huge dork. 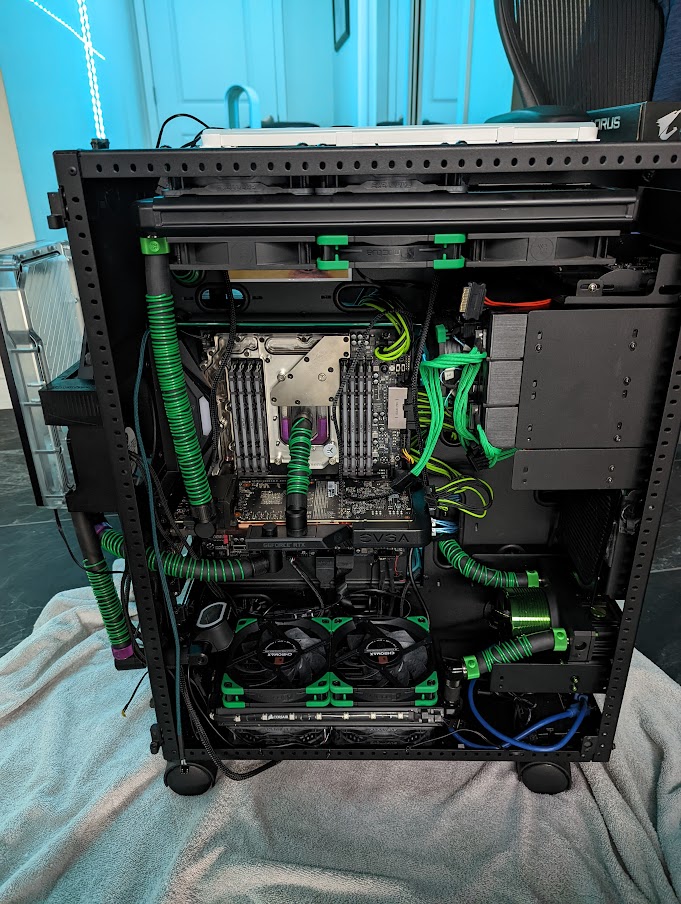