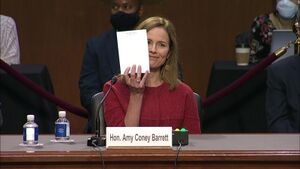 ACB has no time for your bullshit.

It is Halloween Anno Domini 2017, and the eight seated Justices eagerly await the arrival of a freshly-confirmed ACB. Amy Coney Barrett, heir to the seat of RBG, two badass women comparable in feist if not interpretation. Soaring high above Washington, D.C., Antonin Scalia breathes easily; he can finally pass to the Beyond. "Pure apppppppppplesauce!" he howls gleefully, ascending towards Opus Dei's skylounge. ACB is 167cm in stocking feet, which means she's stood at least 173cm in every pair of shoes she's worn since turning sixteen in Metairie, Louisiana. Seven months pregnant with Liam, her fourth, a writer for Notre Dame's Observer asked why she still insisted on running her daily laps in stilettos. ACB laughed, wide eyes looking up(Heaven?)ward, and answered "sprezzatura". The Fighting Irishman had to look the term up later, and whistled (but we do note that her next two children were adopted).

Her initiation goes swimmingly, and she's successfully avoided That One all evening. Clarence Thomas lays aslumber in his rookery, gnawing on pork even in his somnolence. Elena and Sonia both made a point to be friendly; she'd been prepared for anything from these two. She hardly needed their support. All the same, she had been happy to have it, and resolved to say a prayer of thanks later. She'd have to keep Roberts placated until such time as she assumed his seat. A curt nod to Alito. At twelve, she'd rather savagely taken his virginity at Duke's TIP summer program. Even then, he'd been listless, ineffective. "Stop crying. You're less handsome when you cry" she'd sung, striding into North Carolina's gravid sunlight from his dorm. Years later, he still can't bear to meet her eyes. Yes, she knew how to manage Sam A Alito just fine.

As she'd feared, she was unable to remember any solitary detail about Stephen Breyer, nor even his name. Where'd he taken his prelaw? Mary Magdelene College or something? A nonentity appointed by a failed saxophonist. Cucks all the way down.

The night was lovely, and she felt her star rising to fill this place. If God willed it, perhaps she and Gorsuch would reshape not just American jurisprudence, but the Holy Roman Catholic and Apostolic universe itself. After all, she grinned, catholic does mean--

Then It was there.

"'SUP, A-DAWG?" rolled his syrupy mid-atlantic voice, an obscenity, a nasal drawl coming up at you like puke. "gonna get some of the fellas together latah, get some blunts, get some bitches, boof some large, fuckin' sweet how the Teflon Don got us both--"

In a flash, she's immobilized him with a Do-jime, judo's feared "trunk strangle", prohibited in competition but fair game among the Brethren, especially if no one else sees. "DAWG WHAT MAH BREW--" she puts just enough pressure on his windpipe to guarantee silence, loathing the touch of his skin. He squirms, and she applies a little more force; both hear the strain of a trachea at its breaking point, sinews buckling under the hate.

"Let's get this absolutely straight, you trust-funded ballless witless Godless gormless asslick Protestant piece of ritually unclean anathematic shit." Her nails--still salon-fresh, she notes with pleasure--are red against his bluing neck. She hews a pattern from his fear. "The first time you slimily look over at me and invitingly smile, you'll boof your own dick in reverse as I rip it off through your aggrieved turdcutter. Then I'll fashion bespoke condoms from your dick, really good ones. I'll use my Cricut. I'm as good at Cricut as I am Law, and the only thing I do better than Law is whipping your ass. Little Cricut Cavanaugh Condoms in pink boxes. $14 a throw at Macy's. Plus a free bath bomb. Then I'll destroy those condoms in holy fire, Brett, because they're an affront to the Lord." She spins him, and spits in his face. "Just like you, Brett. Just like you." As she stomps his insole, dropping him to the floor, she bends down to whisper. "Then I'll publish a paper about it in a leading law journal. Unlike you, Brett. Unlike you." Not a single brown hair has been displaced, nor a drop of her Sazerac.

Writhing on the floor, whimpering, Brett Kavanaugh coughs out a plea, "but Barettnator i'm Catholic dawwwg."

"Not anymore you're not, Brett." She upends a 40oz of Olde English onto his anguished face. "I'd swear you'd just been baptized via immersion." She throws a judicial robe at him. "Clean yourself up."

And above them circles still the indomitable spirit of Nino, Antonin Gregory Scalia, the Old Master. He executes barrel rolls and loop-de-loops and once even Pugachev's audacious Cobra, but now behold! as he sheds this world's coil, finding himself newly whole, clean and unimpeded, and is free, catapulted home at desperate speeds, away from the jiggery-pokery and "the Court's self-awarded sovereignty over a field where it has little proper business", turning coruscant right angles to all mortal dimensions, sounding a bell-clear and nearly maternal call-to-arms in all the earth's well-known tongues.

in nomine patri, et fili, et Spiritus Sancti, Amy she mouths, as she has ten thousand times before. the small blasphemy has never failed to bring a smile to her face. it doesn't fail now.

and though she may walk through the Valley of Death, she is tonight 175cm in her heels.

ps if Scalia was still alive, rather than calling for Big Government security, the Justices would be erecting tents in their yards and taking bitches down with long guns. just further proof, as if anyone needed it, that Brett Kavanaugh is a sad little trust fund pussy.