I dutifully wrote up Yet Another First Ascension Post on rec.games.roguelike.nethack. 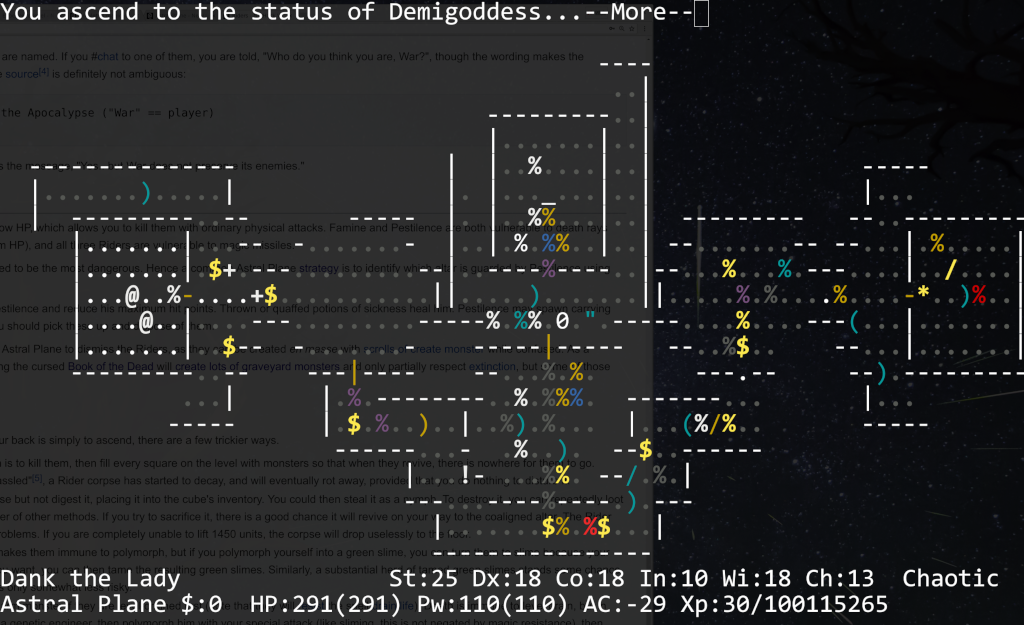 NetHack swept like wildfire through the Georgia Tech undergraduate community, particularly computer science majors, during the Fall of 1999. I played a few games, but didn't get drawn in as deeply as many friends. Over the next few years, most of the people I knew who cared about the game ascended, often many times, but I never even reached Medusa. Most of those years I played only a few games, if any, though I picked NetHack back up for a good week or so pretty regularly. Finally, the world's most boring business trip got me back deep into the game a month ago; when 3.6.1 was released the day I quit that job, it seemed quite the omen. Today, Saturday 2018-05-05 at 0440 EDT, Dank the Valkyrie ascended to demigoddesshood via NetHack 3.6.0 on the private Havoc (gtf.org) server.

I can't think of anything else I've wanted to do that took nineteen years. Thanks, DevTeam, for the Greatest Game of All Time. Thanks, NetHackWiki community, for a fabulous resource. I don't ever intend to play a video game again, unless I write it, or some future children demand it.

It wasn't any kind of noble ascension, with 7 genocides, 14 wishes, and 3 well-applied amulets of life saving. But hey, I'm willing to use whatever the RNG sends me for the first time. Wishes have a pretty sharply diminishing return anyway, and it's not like I was going for genocide scrolls. One AoLS was burned choking myself with a wraith corpse, coming back, and gaining the XL, because I knew I had another one in my BoH. Lousy play of that sort.

It's really nice to engrave with a wand in the Castle, be prompted for a wish, think "isn't that normally in a chest with a scroll", and a few seconds later verify that indeed, it normally is. I'd never received two WoW on a single level before =].

The one "conduct" requirement I had was that, as a Discordian/Erisian in real life, I could play a Valk, but must become chaotic ASAP (ended up being immediately after the Quest, as I'd already cleared out the Castle). Helm of Chaos went on, lost 10 AC of divine protection, but hey that's CHAOS baby, Hail Eris and all that.

Most embarrassing moment was burning a wish on a t-shirt (because with 14 wishes, who has time to polypile up crap), going to +4 with two blessed enchant armors, thinking the limit was +5 and not +4, and vaporizing it all in the span of seconds. Combined with the loss of 10 from the Helm, that's 14 AC lost for no really good reason. Ehhh, -29 proved more than enough, combined with +6 Grayswandir (I'd never received it before via sacrifice, so I blew a wish on it this time).

Best moment was passing an amulet of poison resistance somewhere around DL10, killing a paper golem next to it, zapping the small lot with a polywand because again CHAOS and intuition, and reaping the exact AoLS and four enchant armor scrolls I could most use. I also enjoyed wiping out all High Priests, and even going and kicking the door down unnecessarily on Pestilence because what's a YAFAP without Pestilence. Never did see Demogorgon. Learned not to eat disenchanters (which I then genocided out of spite). Rodney showed up far less frequently than I've seen him on two other runs, which thanks I suppose. Never got to burn two entire WoDs, despite sitting around waiting for Famine/Pestilence to wake back up for some time.

but the species who got it hardest were gnomes, at 58.