i was chanting "all rights worth shit" whilst casting meaningless Annual Copyright Update cantrips upon libtorque, a project from 2010's CSE 6230 with Professor Richard Vuduc, who can bench press you with his mind. libtorque was tremendous fun to work on, leading me to distill many thoughts that i'd been kicking around for a few years, but i consider it a research project and not an industrial-strength library. i don't touch it terribly often, though I do check for compiler warnings every few gcc releases. behold! the presentation i gave on it for GT's Arch-Whiskey seminar--yes, loves, i explicitly selected that background. i looked upon it approvingly, like Keats unto Chapman's Homer. i said, softly, "nicholas, you're really killing the ol' presentation backgrounds, motherfuckers are gonna be cheering when they aren't squinting". i might or might not have sung "don't let me get in my zone" with Kanye West. i thought it Good.

indeed, meth is one hell of a drug.

on my AMD 3970X Threadripper, the archdetect program included with libtorque failed out. I traced this down to the function decode_amd_l23cache() in my x86 hardware discovery. Intel and AMD caches were at one time defined by a disordered map from integers to complete cache descriptions, as in each integer meant a completely different set of cache parameters, leading to code like:

and to a great deal of misery and frustration, and daydreams of becoming a stripper because you sure as shit don't want to be a programmer. writing this is about as fun as bobbing for apples in an skinsearing hot metal washbucket of curdling possum smeg. every time a new microarchitecture employed a different cache size, thus mandating a new CPUID number, your discovery failed. in fact, my very first PR at GOOG was to add descriptors for whatever rhodium-crusted CapEx-demolishing Xeons we were fielding, as apparently 70,000 engineers had until then been content to just read "Couldn't discover cache size for processor type FOO!" twice in their logs every time they ran a binary before bitching on eng-misc for six hours or cosplaying a union. perhaps it was lost in the 400KB of messages about your 1.4GB HelloWorld go binary failing to elect a paxos leader. google-sized problems, baybee!

sounds good, and I've used this for over a decade to size up my MLCs and LLCs, being a faithful acolyte of pebble engineering.

mother of God, i thought. i've forgotten how to mask bits, or perhaps how to count to 12, or maybe even how to spell edx. i went to check the decoded cpuid output... 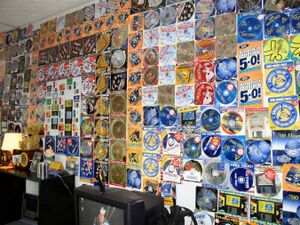 sometimes you got a magazine and it was just AOL cds

dogs fucked the Pope; no fault of mine! now hardware architects can do some very strange things, and indeed I saw an Intel i7 of the broadwell era with a twice-cursed 6-way TLB, and the 96KB L2 of the Alpha 21164 was famously associativé à trois, as befitted the carefree California culture of the mid-90s. tupac was still alive (doing 187s), big pete wilson was governing (proposing 187s), and the homeless were conveniently hidden behind piles of AOL install media (each man, woman, and child on earth had approximately 187 AOL cds). I once mailed Yale Patt about the 3-way associativity, and he responded with twelve pages of baseball stats descending into a challenge of pistols at dawn. "ps I'll predict your branches you brain-dead ass-eyed Atlanta son of a bitch pps send nudes" but i digress. anyway, however (justifiably) drunk with dankness the AMD boys are, i very much doubt Dr. Lisa "the Su is for Superwoman" Su is letting enneadic caches out the door.

so...what's goin' on here? i've gotta get back to profitable work for the moment, but watch this space for the inevitable solution. hack on!

ahhh, the Family 17h Processor Programming Reference explains that this scheme is dank no more, and the fancy new 0x8000001D leaf must be used in its place. using said leaf, the results are what we expect, and my $2000 processor's big swinging cache is properly detected. i guess even a 3990X doesn't have enough cores to update the fucking cpuid pdf. they're paying by the electron down in santa clara--it's mad max times.

one must issue a 0x80000000 ExtendedMaxSupport leaf request, and if 0x8000001D ExtendedCacheProperties is available, that ought be used (it also seems necessary to execute 0x80000001 FeatureExtId and check for the TopologyExtensions bit (0x0x400000) in ECX). iterate on the leaf until EAX returns 0. this is actually a nice upgrade in functionality, especially as you can now detect sharing of caches among cores, inclusivity/exclusivity, and whether WBINVD or INVD is in use.