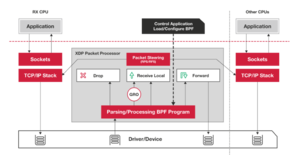 In the beginning, there were applications slinging streams through the packetizing Honeywell DDP-516 IMPs, and it was good. Then multiple applications needed the network, and needed it in different ways. Then the networks needed walls of fire, and traffic which was shaped. Some called for the Labeling of Multiple Protocols, and others called for timestamps, and still others wanted to SNAT and DNAT and also to masquerade. And yea, IP was fwadm'd, and then chained, and then tabled, and soon arps and bridges too were tabled. And behold now tables of "nf" and "x". And Van Jacobson looked once more upon the land, and frowned, and shed a single tear which became a Channel. And then every ten years or so, we celebrate this by rediscovering Van Jacobson channels under a new name, these days complete with logos and corporate sponsorship.

Most recently, they were rediscovered under the name DPDK, but the masters of the Linux kernel eschewed it, and instead rediscovered them under the name XDP, the eXpress Data Path, and eXpressed it using eBPF programs. XDP was added to Linux 4.8 and has been heavily developed since then, and is often seen together with iouring, especially with the new AF_XDP family of sockets.

XDP is used to bypass large chunks of the Linux networking stack (including all allocations, particularly alloc_skb()), especially when dropping packets or shuffling them between NICs. 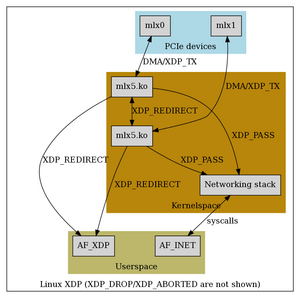 An XDP program is an eBPF program invoked for each received packet which runs either:

Offloaded mode can theoretically beat native mode, which will usually beat generic mode. XDP programs are specific to a NIC, and most easily attached using xdp-loader. Lower-level functionality is available from libxdp, and below that is pure eBPF machinery. Multiple XDP programs can be stacked on a single interface as of Linux 5.6 (multiprog requires BTF type information, created by using LLVM 10+ and enabling debug information). XDP is only applied to the receive path.

An XDP program can modify the packet data and perform limited resizes of the packet. It receives an xdp_md* and returns an action code as int:

Think of XDP_ABORTED as returning -1 from the eBPF program; it's meant to indicate an internal error. Theoretically, the packet could continue through the stack (as it would have if no XDP program had been running), but XDP uses "fail-close" semantics. Edits to the packet are carried through all XDP paths. Note that everything up through and including XDP_TX can be represented in two bits; this will be important later when passing flags to bpf helpers.

xdp-loader status will list NICs and show details regarding any attached XDP programs. ethtool -S shows XDP statistics. ip link will also show a summary of devices' XDP chains. xdp_dispatcher is a metaprogram loaded by xdp-loader to support chaining multiple XDP programs; it will be present whenever programs were loaded using xdp-loader.

Note that XDP runs prior to the packet socket copies which drive tcpdump, and thus packets dropped or redirected in XDP will not show up there. It's better to use xdpdump when interacting with XDP programs; this also shows the XDP decision made for each packet.

For XDP programs written in C, use clang with -target bpf -g (as noted above, use -g to get BTF information, necessary for xdp-loader's multiprogram support). If your object is rejected by the eBPF verifier, you've most likely left out packet length checks. Proper checks before accessing data are mandated by the verifier.

The C standard library is not available to XDP programs (though you might be able to use __builtin_memcmp(), __builtin_memcpy(), and friends). Looping is not generally possible except through the bpf_loop() helper.

Configuration of an XDP program is non-trivial. Consider an XDP program which wants to forward to an AF_XDP socket only for certain destination IP addresses, passing the remainder into the network stack. There seem to be three ways to do this:

I believe the latter to be JITted down to just a few instructions, despite looking like a system call (you're in the kernel, where there are no system calls). eBPF maps are atomic, though, so there must presumably be some manner of synchronization there. Recompiling on the fly pretty much requires dragging along bpfcc. Patching the binary seems rather fragile for peacetime.

Modifications should generally take place through the functions exposed in bpf-helpers(7). Updating data in a TCP payload, for instance, requires recomputing a TCP checksum, which can be done most effectively through these methods. bpf_redirect(), bpf_redirect_peer(), and bpf_redirect_map() are used to set the destination of an XDP_REDIRECT operation. bpf_clone_redirect() allows a clone of a packet to be redirected, while retaining the original.

Redirect the packet to the endpoint referenced by map at key. Behavior depends on the map type:

XDP_REDIRECT is returned on success. The lower two bits of flags are returned on an error. Other bits of flags are handled in a map type-dependent manner. As of 6.1.2, the only flags defined are BPF_F_BROADCAST and BPF_F_EXCLUDE_INGRESS, intended for use with device maps. BPF_F_BROADCAST will send the packet to all interfaces in the map (key is ignored in this case); BPF_F_EXCLUDE_INGRESS will exclude the ingress interface from broadcast.

There is significant (on the order of hundreds of bytes) overhead on each packet. Furthermore, until recently (5.18), or without driver support, XDP cannot use packets larger than an architectural page. On amd64 with 4KB pages, without the new "multibuf" support, only about 3520 bytes are available within a frame. This is smaller than many jumbo MTUs, and furthermore precludes techniques like LRO. With multibuf, packets of arbitrary size can pass through XDP.

A very serious problem is that of IP fragmentation if one is doing anything with Layer 4. If you're for instance only forwarding some traffic to an AF_XDP socket, based on TCP or UDP port, you'll have to reassemble fragments in your XDP program in order to deliver any secondary fragments (as they will be lacking the necessary Layer 4 headers).

When CONFIG_XDP_SOCKETS is set, bpf_redirect_map() can be used in conjunction with the eBPF map type BPF_MAP_TYPE_XSKMAP to send traffic to userspace AF_XDP sockets (XSKs). With driver support, this is a zero-copy operation, and bypasses skbuff allocation. Each XSK, when created, should be inserted into XSKMAP.

How is AF_XDP different from AF_PACKET (especially when the latter is backed with kernel-shared ringbuffers via PACKET_RX_RING)? Without mapped ringbuffers, packet sockets will always take an skbuff allocation (see diagram to the right) into which they will clone the packet, whereas XDP can avoid this outside of Generic Mode. Even with mapped ringbuffers, there is a copy--the packet socket fundamentally clones frames. XDP furthermore allows more direct control over parallelism, and can be tied into the NIC's hardware Receiver-Side Scaling. XDP allows RX and TX descriptors to point into the same memory pool, potentially avoiding copies. Note that the AF_PACKETv4 proposal also used distinct descriptor rings.

Each XSK has either one or both of two RX and TX descriptor ringbuffers, along with a data ringbuffer (the UMEM) into which all descriptor rings point. The descriptor rings are registered with the kernel using XDP_RX_RING/XDP_UMEM_FILL_RING and XDP_TX_RING/XDP_UMEM_COMPLETION_RING with setsockopt(2). UMEM is a virtually contiguous area divided into equally-sized chunks (chunk size is up to the user; it should usually be the MTU plus XDP overhead), and registered with the XDP_UMEM_REG sockopt. Packets will be written to distinct chunks. bind(2) then associates the XSK with a particular device and queueid, at which point traffic begins to flow. It is expected that chunks will be a multiple of the page size, but this does not appear to be necessary—in particular, success has been had doubling up two 2KB chunks on a 1500B MTU, despite amd64's minimum 4KB page size.

The application indicates using the Fill ring which chunks packets ought be placed in. The poll()able RX ring signals packets written by the kernel. The application writes packets for transmit into the TX ring, and the kernel moves descriptors from TX to the Completion ring once transmitted.

XDP_UMEM_REG wants a struct xdp_umem_reg, containing addr (a pointer to the map as uintptr_t), len (length of the map in bytes), chunk_size and headroom. regarding chunk_size, if you're getting EINVAL, consult the kernel's xdp_umem_reg() (from 6.1.7):

The RX and TX descriptor rings are arrays of struct xdp_desc, a 16-byte structure:

Only the UMEM is freely allocated by the user process. The rings are mapped into user space from a shared kernel object, via calling mmap(2) on the XSK using the results of the XDP_MAP_OFFSETS sockopt.

"Bounce on bind" is bad: these devices go down for a few seconds when attaching an XDP program.